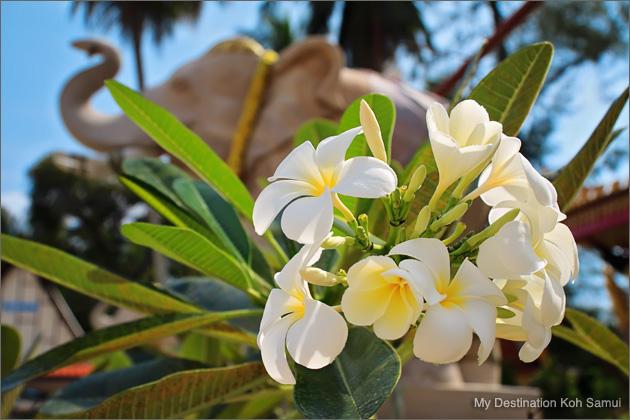 As you wind around the 4170 Road that runs through the southeastern corner of the island you'll notice 2 huge elephant statues at the entrance of the road to the Taling Ngam Village.

You may wonder why here? What do they represent? Well, there is a story behind them, with the blessing of royalty.

In 1979, Pra-kru Pairoj Kiriwong the head monk of the local temple Wat Kiri Wongkaram (home of Samui's other mummified monk), wanted to beautify the entrance to the village. Encouraging passers-by to visit the village and its temple, so began the project to build the life-sized elephant entrance.

The project became not only a village project but also an island project, with local villagers seeking the support of the island community to help bring the Elephant Gate to fruition.

The then president of Bangkok Airways, was so intrigued by the project he contacted the Princess Galyani Vadhana, sister of the King at this time and asked if she would come and visit Taling Ngam and offer her royal blessing.

The Princess duly accepted the invitation, upon her arrival the final piece of the project had yet to be added, the eyes on of the elephants. Made from black gemstones, the eyes were kept waiting for the Princess to give her a ceremonious royal blessing before being fixed and completed.

Those eyes of the Elephants that gazed down upon all who passed through the gate had the royal blessing of a princess and the gate plays a significant part in the history of this lovely little authentic Thai village of Taling Ngam .

3 decades later, and the gate had taken some punishment from mother nature, and was in need of a good refurbishment.

The face of the local community in Taling Ngam has changed in those 30 years with ex-pat residents now living side-by-side with locals.

As it was 30 years ago, the local residents now including their ex-pat members rallied together to restore the Elephant Gate to her original state of glory.

Before the restoration could be complete, Princess Galyani Vadhana passed away in January 2008. As a mark of respect the gemstone eyes have been left out of the statues, as the Princess was once again to be invited to bless the eyes in a royal ceremony.

You will now notice the elephants are again in a grand state, except when you look at the eyes you will notice they are painted rather than the original gemstones.

The villagers have requested the gemstone eyes to be once again blessed in royal ceremony, and until such time the gemstones will not be adorning the gates to Taling Ngam.

So when you visit the area, stop and take time to view these great statues, as you now know the history and will know if royalty has again passed through to bless this beautiful village.