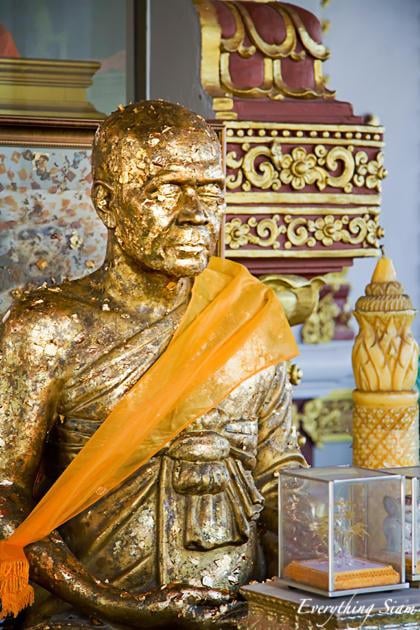 Born in the late 1800's, Loung Pordaeng, the most famous of Koh Samui monks was a well respected member of the local community when he entered the monastery in his early twenties.

After 2 years of study, he left the Wat Samret temple to marry a local girl and start a family. Once his 6 children had reached adulthood, Loung Pordaeng ventured back to Buddhist studies, becoming a monk in 1944. His passion in life was Buddhism and he became one of the leading monks on Koh Samui.

In 1973, Loung Pordaeng passed away as he predicted, while sitting peacefully in meditation. Before his death he requested his students to cremate his body should his remains decay, if his remains were preserved then he wished to be placed on display at the temple to inspire monks of the future to study the teachings of the Buddhist scriptures.

So as requested a special structure was built and the monk was placed in a glass casket for all to view. His remains are pretty well intact after nearly 40 years and the thoughtful monks have given him a cool pair of Ray-Ban sunglasses to wear for those sunny Samui days.

The Wat Khunaram Temple can be found after the Hua Thanon village heading west on the ring road. It's opposite the road to the Tar Tan Waterfall, Mountain Grand View Viewpoint and Tarnim Magic Garden.

Most safari tours stop off here or your hotel will organize a tour for you.